Gosh, it’s a struggle!
I’ve been away due to the flu and have still not recovered from it. But even if I’m weak as heck I figured I had enough energy to write a few lines again!

Since it’s Monday, let’s start with my pick for SOTW. You’ve probably heard about this lady and her new song all weekend. Her first new song since 2014. I know it’s hard to believe since Beyoncé is always there anyhow, but Formation is her first new jam in quite a while, released to get her Super Bowl halftime show even more hyped.

I’m not totally in love with the song, yet I’ve noticed I can’t get it out of my head, so Bey must have done something right. It’s a weird piece.
Decide for yourself:

Btw, Queen Bey has also taken the weekend to announce a world tour, named after the new single. Why be satisfied with a new hit song and a Super Bowl halftime show, ya know?!

The Formation tour kicks off in April and includes the US and Europe. Click HERE to see dates and cities.

Celine Dion is going through an incredibly rough time at the moment. Both her husband and brother passed away a week or two ago after battling cancer.

With This Tear is therefore the song that’s been on my mind lately. One of the most beautifully emotional ballads I know, written in the 90’s by none other than Prince.

I’ll leave it it that. Here’s my SOTW:

Prayers to Celine Dion and her family.

I’m almost sorry to say that this week’s song is by a young woman I’ve featured an eery number of times by now. Yes, I’m talking about Taylor Swift. That 1989 album is just too darn catchy!

Her latest single is not only haunting with a chorus that gets stuck in your head, it also has a beautiful video.

Here’s Out Of The Woods: 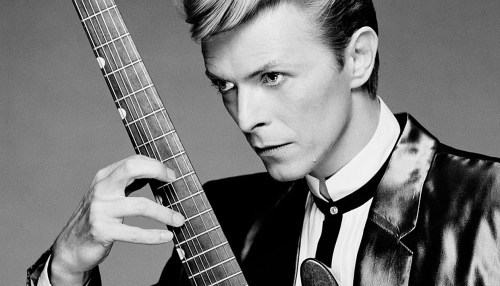 Rock icon David Bowie has passed away at the age of 69, after battling cancer. This only two days after his birthday and the release of his new album Blackstar.

I literally gasped when I read the news this morning. I think I genuinely thought he was immortal. It is truly surreal to think he is not. Some people have that talent, that body of work, that personality that seems larger than life. David Bowie was that kind of person. Artist. Rule breaker.

But Ziggy Stardust will live on in the hearts of millions of people. It becomes obvious how many he touched when one surfs the Internet. People are in shock. They are mourning. Music is tremendously powerful and speaks to the very chore of one’s being.

I don’t feel like the right person to write about the artist that was David Bowie, so I rather refer you to other sites for that. TIME, for instance, has an article you can read.

I will, though, dedicate my Song Of The Week to the legend. I first had another artist posted, but that doesn’t feel right now.

It’s Bowie’s last single, which came out only a few days ago. Lazarus is quite an eery piece as it seems he knew he was about to die. But it’s hauntingly beautiful.

I would like to end this, though, with another piece that I’ve never stopped to love, especially due to the lyrics. The classic Life On Mars.

She was the daughter of legendary crooner Nat King Cole and had the music in her genes.

My SOTW is a sort of duet between Natalie and her father. Truly unforgettable.

Tracy Chapman’s classic as been my SOTW before, this time of year.
But now the lyrics are even more appropriate than ever…

I can’t say I’ve made up my mind about what to think of Miley Cyrus’ new song.

On the one hand it’s like “wtf is she doing, why is she dressed as a baby?!”  And “why is she talking throughout most of the song, what is this?”.

One the other hand I love the beat and the oddness of the creation.

I guess this is what’s cool about BB Talk. Love it or hate it. Or both.
Anyhow it’s my SOTW.

Everyone who remembers the 90’s remembers the boyband craze. One of the biggest bands were obviously Take That. Even if Backstreet Boys and Boyzone were my top two…

A couple of decades later and they are still going strong! Only three members big now (after Robbie Williams, Jason Orange left) the band has a slightly different sound but it works. It’s fun, it’s mature.

Without further ado, my SOTW is last year’s These Days:

Here’s the video behind his sizzling hot performance at the AMAs. Here’s my Song Of The Week: